The video is the result of a complex, long video shoot, so harsh that Billy Idol’s contact lenses fused to his eyeballs during or soon after. 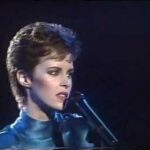 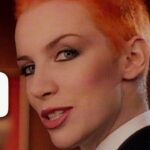